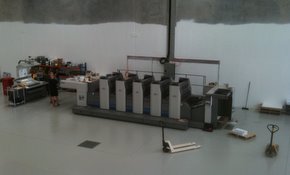 The printer’s Milton site was one of the worst affected by January’s natural disaster, with almost all of its printing and finishing equipment damaged.

The company is still waiting on its insurance payout, and ABC director Alan Atterton said his firm was just one of many flood-damaged businesses in Brisbane facing an uphill battle over its claim.

But the company managed to keep operating thanks to the help of fellow Brisbane printer Platypus Graphics.

“Without Platypus’ assistance, I’m not sure we would be around today,” he said.

“We have been using their facilities up until 29 April and we still have to work out how to pay back [Platypus owner] Tom Lusch.

“It was an unbelievably charitable thing they did for us; we were able to work on their press from 6pm till 6am to maintain our workflow.”

Atterton also cited the help of Peninsula Graphics, who were forced to close after the floods, and the dedication of the company’s own staff as factors in ABC’s endurance.

“Logistically it has been a nightmare. After 11 January, we have learned to do a number of new things printers don’t usually have to deal,” he added.

“The majority of our staff has stuck together and they have been sensational. We are very fortunate to have them.”

Atterton expected the company to be fully functional in the Banyo site by 20 June.

“We are looking forward to getting into the site as we are actually going to be in a stronger position than before with more press power.”